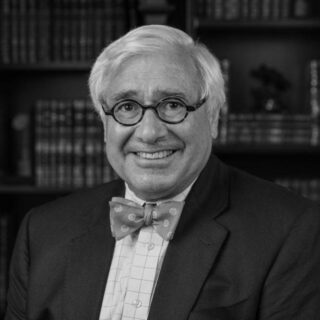 Prior to Professor Guroian joining the faculty, the Christian East received little attention in the course offerings at UVA. Some of the historical courses in the Religious Studies Department included readings from eastern Church Fathers, and on occasion an historical course at the undergraduate level that covered Eastern Christianity, was offered, but this was the extent of Orthodox Christianity in the classroom for both undergraduates and graduate students; an entire world of Christian experience, theology, and history was largely untaught and unacknowledged. Pope John Paul II referred to Orthodox Christianity as the other lung of the Church, yet it was missing at UVA as it is in all of but a very few Theology and Religious Studies departments within the United States.

Since the Fall of 2008, Dr. Guroian has changed this picture dramatically at UVA. His breadth of expertise has enabled him to teach a variety of courses in ethics, theology, history, literature, and iconography that have brought Orthodox Christianity vitally into the Religious Studies curriculum. He has taught such classes as: Themes in Eastern Orthodoxy: An Introduction, The Icon in Orthodox Theology, Contemporary Orthodox Theology, History of Christianity, Human Image, Divine Image: East and West, Ecology, Culture and Christianity, Sex and Creation, and Modern Russian Religious Thinkers. The result is that UVA is now one of the few universities in the United States at which one can study and receive an M.A. or Ph.D. focusing on Orthodoxy, especially contemporary Orthodox theology. His position is the only one that is specifically in Orthodox Christianity at any major research institution within the United States.

Professor Guroian is a prolific and world-renowned author, whose books are popular with a wide audience both within and outside academia. He has authored ten books; several have been translated into Russian, Romanian, and Greek. His most recent book Melody of Faith: Theology in an Orthodox Key was published in 2010. He is currently at work on a book for Oxford University Press concerning marriage and contemporary society from an Orthodox perspective.

Professor Guroian has two advanced graduate students working on their Ph.D’s in Orthodox theology, and receives many inquiries from students who desire to come to UVA for their graduate work. Several of his undergraduate advisees are now at other institutions, such as Notre Dame and Princeton, pursuing graduate work in theology. His undergraduates are enthusiastic about his inspired teaching; they nominated him for the annual Student Council Distinguished Teaching Award, which he received for 2010-2011.

In addition to courses themed in and including Orthodox Christianity, Professor Guroian also brought with him the funding to undertake a major library acquisitions project at the University of Virginia. The goal of this acquisitions project, now called “Paradosis,” is to create a unique and comprehensive collection of Orthodox Christian books at UVA to be used by students and scholars alike. The collection now includes Byzantine and Slavic liturgical and theological texts, contemporary Orthodox theological works from around the world, as well as materials from the minority Orthodox traditions, including Syriac, Armenian, Ethiopic, and Coptic.

A review of the UVA library’s holdings in Orthodox Christianity conducted by Professor Guroian and his graduate students revealed that UVA lacked many texts on contemporary Orthodox theology, liturgical sources, and works on canon law. These volumes, which represent American, Russian, Greek, Romanian, and other source traditions, were identified and purchased. The project then focused on the “minority” Orthodox traditions, with many Armenian, Syriac, Coptic, and Ethiopic theological, liturgical, and historical texts acquired. This acquisitions project continues, yet even now thanks to the Fieldstead funding and the guidance of Professor Guroian, the University of Virginia contains one of the very best collections of Orthodox materials in the English-speaking world. These books are being appreciated and used by the community at UVA; a survey in 2010 revealed that 40% of the collection was checked out during the middle of the spring semester.

In an effort to raise awareness about this excellent and growing collection of Orthodox texts, Professor Guroian received a fellowship in 2009 from UVA’s SHANTI (Sciences, Humanities and Arts Network of Technological Initiatives) designed to provide humanities projects with technical support. Professor Guroian, with his graduate students, created an online presence for the collection, Paradosis (http://pages.shanti.virginia.edu/paradosis/). A fully searchable, annotated electronic bibliography was created and is now available to anyone interested in exploring the rich collection of Orthodox texts now held at UVA.

Professor Guroian’s position at the University of Virginia has great significance for his students, and the department at UVA, but also for the wider world of Orthodox theology. In American universities Orthodox theology has long been ignored and neglected in religious studies and theology departments. By virtue of his presence at UVA, Professor Guroian is significantly contributing to the study of Orthodox Christianity in the twenty-first century.